Facing is the process of removing metal from the end of a workpiece to produce a flat surface. Most often, the workpiece is cylindrical, but using a 4-jaw chuck you can face rectangular or odd-shaped work to form cubes and other non-cylindrical shapes.

When a lathe cutting tool removes metal it applies considerable tangential (i.e. lateral or sideways) force to the workpiece. To safely perform a facing operation the end of the workpiece must be positioned close to the jaws of the chuck. The workpiece should not extend more than 2-3 times its diameter from the chuck jaws unless a steady rest is used to support the free end.

If you read many books on machining you will find a lot of information about the correct cutting speed for the movement of the cutting tool in relation to the workpiece. You must consider the rotational speed of the workpiece and the movement of the tool relative to the workpiece. Basically, the softer the metal the faster the cutting. Don’t worry too much about determining the correct cutting speed: working with the 7x lathes for hobby purposes, you will quickly develop a feel for how fast you should go.

Until you get a feel for the proper speeds, start with relatively low speeds and work up to faster speeds. One of the great features of the 7x is that you can adjust the rotational speed without stopping to change belts or gears. Most cutting operations will be done at speeds of a few hundred RPM – with the speed control set below the 12 O’clock position and with the HI/LO gear in the LO range. Higher speeds, and particularly the HI range, are used for operations such as polishing, not cutting.

Preparing for the Facing Cut

First, make sure the tumbler gear lever on the back of the headstock is in the neutral (middle) position so that the leadscrew does not rotate. This is very important since you will clamp the half nut on the leadscrew during the facing operation to keep the saddle from being forced back away from the end of the workpiece by the force of the cutting operation.

Choose a cutting tool with a slightly rounded tip. A tool with a sharp pointed tip will cut little grooves across the face of the work and prevent you from getting a nice smooth surface.

Clamp the toolpost in place and advance the carriage until the tool is about even with the end of the workpiece. Make sure that the compound is not all the way at the end of its travel towards the chuck; about midway in its range of travel is good.

Set the lathe to its lowest speed and turn it on. Make sure the leadscrew is not turning. Turn the lathe off and press the half-nut lever down to engage the half-nut with the leadscrew. When properly engaged, you should feel the lever click into place in a nearly horizontal position.

You may have to work the carriage handwheel back and forth a little to get good engagement. Locking the half-nut to the leadscrew will prevent the carriage from moving back away from the workpiece during the facing operation. If this were to happen, the end of workpiece would be a slight cone shape instead of perfectly flat – or the tool might stop cutting entirely. A much better way to lock the carriage in place is to add a carriage lock to your lathe as described on Varmint Al’s site and on my mini lathe mods page. 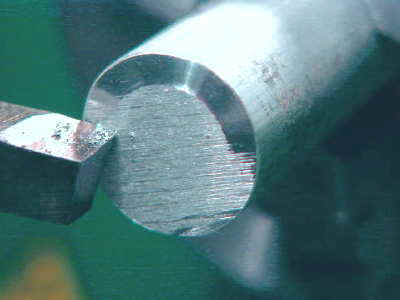 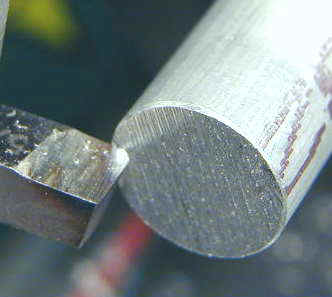 If the compound is set at some other angle, say 30 degrees, to the cross slide, then it will advance the tool less than .001 for each division. The exact amount is determined by the trigonometric sine of the angle. Since the sine of 30 degrees is .5 the tool would advance .0005 (five ten-thousandths or 1/2 of one one-thousandth of an inch) for each division in this example. Always wondered why you needed trig? Now you know 😉

Here’s a picture of the first pass of a facing operation. I am removing about .010″ of metal in this pass. 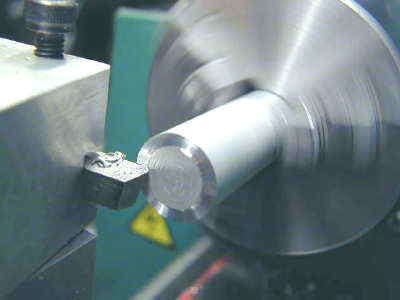 Cutting on the Return Pass

If you crank the tool back towards you after it reaches the center of the workpiece you will notice that it removes a small amount of metal on the return pass. This is because the surface is not perfectly smooth and it is removing metal from the high spots.

If you need to remove a lot of metal, to reduce the workpiece to a specific length, for example, you can take advantage of this return cut to remove more metal on each pass by advancing the tool a small ways into the workpiece on the return pass. Since the tool must plunge into the face of the workpiece, this works best with a fairly sharp pointed tool.

Depending on how rough the end of the workpiece was to begin with and how large the diameter is, you may need to make 3 or more passes to get a nice smooth finish across the face. These initial passes are called roughing passes and remove a relatively large amount of metal.

When you get the face pretty smooth you can make a final finishing cut to remove just .001 to .003″ of metal and get a nice smooth surface. The finishing cut can also be made at higher RPM (say 1500 RPM) to get a smoother finish.

Here’s a picture of a finishing cut in progress, removing about .002″ of metal at around 1000 RPM. 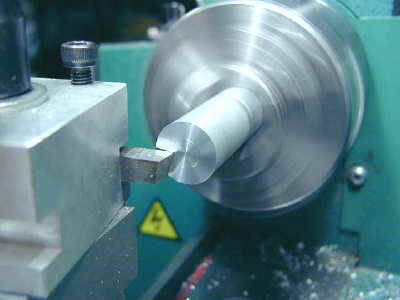 Here’s a picture of the finished face of the workpiece. 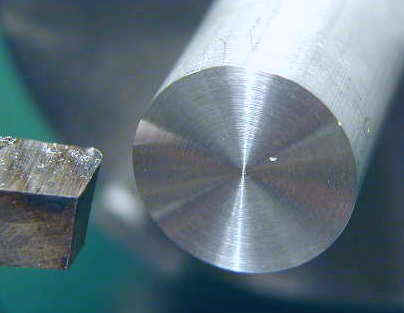 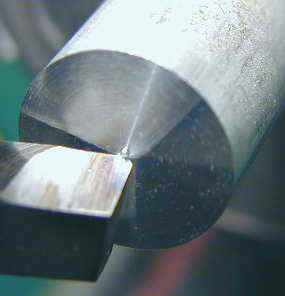 The picture on the right shows what happens if the tip of your cutting tool is below the center line of the lathe – a little nub is left at the center of the workpiece. The same thing happens if the tool is too high but the nub will have more of a cone shape in that case.

If the tool is too low, place a suitable thickness of shim stock underneath the tool in the tool holder. If it’s too high, grind the top down a few thous.

Facing operations leave a rather sharp edge on the end of the workpiece. It’s a good idea to smooth this edge down with a file to give it a nice champfer and to avoid cutting yourself on it. With the lathe running at fairly low speed, bring a smooth cut file up to the end of the workpiece at a 45 degree angle and apply a little pressure to the file.

Note that I am holding the tang end of the file in my left hand and the tip in my right hand to avoid having my left hand reaching over the spinning chuck. Thanks to John Chatham of the 7×10 interest group for this important safety tip.

Be sure the metal tang of the file is protected by a wooden handle or other material. Without this precaution there is a danger that the file tang could be forced back into your palm or wrist with serious consequences. Mine is covered by several layers of heat shrink tubing and tape.

I use the colored tape in various combinations to help me quickly find the tool I need from my working pile of tools. Some guys replace each tool to a specific holder after they use it. I am not one of those guys. 😉

This picture shows the finished surface and beveled edge. This is what a good facing cut should look like: smooth even surface with no raised bump in the center. Lay an accurate straight edge across the surface of the face and you should not be able to see any light under the edge.

If you detect a slight convex shape, the carriage may be moving back away from the headstock during the cut. 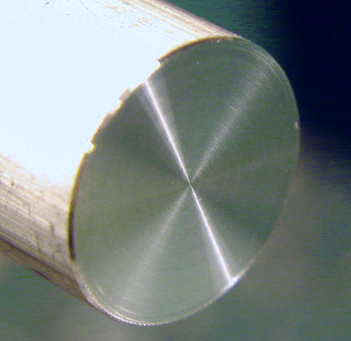