I have bestowed ‘classic’ status on this model, because it was the one that started it all. It was the standard model when the 7×10 interest group started out and was being used by Jose Rodriguez, Varmint Al and Ty Hoeffer. It was also my first mini-lathe.

You can find extensive information on this model on the Features page. I owned one, used it extensively and was very happy with it, but traded up to a 7×12 that I’m still using as of 2008. Aside from the usual gripes, the main disadvantage with this model is the short bed. It is really 4″ shorter than the 7×12 and is very limited on space for drilling operations.

Dean Dempsey’s shop has a version of the Harbor Freight 7×10 that is a bright red color. I’m partial to the old ‘hammered green’ color, myself, but some owners think the green color is ugly. Other than the color, the red version with SKU#33684 is apparently identical to the classic green version with the same SKU#. 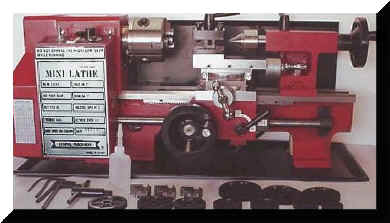 There is an older model of the Harbor Freight lathe which uses 3/8 inch tools and does not have the protractor scale on the compound. Very early models included metal gears for the leadscrew gear train but newer models use black plastic gears.

Some users have expressed concern about the durability of the plastic gears. They hold up fine for years of use as long as they are not subjected to extreme forces such as running the cutting tool into the chuck under power feed.

Even then, the most common failure seems to be stripping the keyway from the gear. Some users have had this happen but have used epoxy to repair the damaged keyway.

This version appears to have been discontinued.

This version was shipped by Harbor Freight for a period of a few months as a substitute when the 33684 version was out of stock. During this time period, if you ordered the 39916 by number, you could get this version, which had some unique features such as the cam lock tailstock.

Some pictures posted by Bob Fandrich on the 7×10 interest group FILES section show a new version from HF that is green, but with a different control panel, crank handles and metal change gears. It uses 3/8″ tools rather than 5/16″.

What’s really interesting is a different version of the tailstock with a cam locking lever, similar to the one J.W. Early designed, but as a stock feature. Note that the tailstock crank also has a calibrated dial.

According to users on the 7×10 group, this version is sold by Harbor Freight as SKU#39916. Here’s a report from an owner (chuknospam):

The lathe arrived today in a wood crate secured with nails and two plastic crimped bands, many extra pieces were included in the form of a throughly smashed tail stock handwheel.

It seems that the Chinese failed to adjust the tail stock properly allowing it to slide on the bed & subsiquently beat the handwheel into a dozen or more pieces. The live center was rolling around in the bottom & had a blunted nose. Chip pan was well bent as was the rear chip guard.

Other than that… Included were a complete set of metal change gears, these were stamped with the number of teeth. The gears were black plated & had been tumble finished, they are smooth & free of burrs & sharp edges. The tailstock hand wheel & apron hand wheel are a Bakelite type plastic.

All embossed dials appear to be satin chrome plated and are easy to read. The tailstock is MT#2, it secures to the bed with a camlock lever on the rear. The nut that secures the tailstock locking plate to the bottom of the tailstock sits in a channel that allows you to adjust the tail stock cam lock lever position by adjusting the nut a flat at a time.

The setting is retained since the nut sets countersunk in the channel. One interesting note here, the tailstock offset is made by lossening a capscrew Under the tailstock! There are no jack screws on the tailstock (or calibrations) to force it left or right of center. A royal pain if you want to cut tapers.

The pivot bolt that holds the threading dial is an ordinary bolt as you rotate the threading dial the bolt lossens and requires snugging to keep every thing in line. It should be replaced with a shoulder bolt. The chuck is secured to the spindle with three studs, the spindle has three holes for securing the chuck.

The spindle appears to be very well machined, it is bored MT#3. The cross slide & compound were loosely adjusted & require that the gibs be adjusted. There was lots of loose hardware everywhere, including the nuts that secure the chuck, the cross slide screw support bolts.

The turret tool holder has a one way detent like that on a revolver and allows one to rotate the tool holder through 4 indexed positions. Useful only if the compound is square to the lathe axis. There is no protractor on this compound. The speed control has a white push button that closes a set of contacts which applies power to the lathe motor.

You are required to have the speed control knob at the lowest setting for the motor to start. This is normal for most variable speed DC motor applications. There is a toggle switch for forward & reverse spindle direction. The slowest spindle speed seems to be less than 100 RPM.

An interesting note, in the manual there is reference to a slow speed interlock to prevent heavy cuts at slow speeds (Chinglish).

In fact there is a load sense, if too much load is placed at slow speeds (under 400 RPM), as in a heavy cut or grabbing the chuck with your hand, the circuit will trip the relay requiring that you hit the white button & start the speed knob at low again.

This is a good thing in DC brush motor application, it prevents burning out individual armature windings as a result of the brushes stalling or nearly stalling & overheating a winding. Included with the manual was a test report listing QC measurements made prior to shipping.

While the tailstock, speed control and handles on this model seem to be improvements over the standard model, the 39916 version only has 3 chuck mounting holes in the spindle.

This is important to note, since the 33864 and the Grizzly 7×12 have 6 mounting holes, enabling you to mount the J&L 3″ 4-jaw chuck directly to the spindle. This version also does not have the protractor scale on the compound.

A report on the 7×10 Egroups states that the 39916 has a smaller diameter hole through the spindle:

I just ordered that lathe at the $329 price and got it Thursday, after only nine days. Only thing is, I was sent the 39916 instead of the 33684. From what I’ve read here, I came out with the better deal in some regards.

But, there was one dimension that will probably do me more harm than the shorter bed length compared to the Grizzly (which I had considered too, like you): the hole through the spindle is smaller on the machine they sent me than it is on the Grizzly or the HF 33684 (it’s .6?? versus the .8?? on the Griz and 33684. I’m in the house with pneumonia and the lathe is in the shop — I don’t remember the precise hole diameter).

This will screw me up because I bought the lathe for my fishing rod building business to make 3/4″ dia. reel seats. The hole through the spindle of the lathe I received is too small, whereas the other would have been fine.

I was left with the dilemma of sending the whole thing back or not, which I chose not to do because it was in such great shape and was very accurate from initial tests with the dial indicator. Only damage was the live center, which had a smashed tip.

HF is sending a replacement of that — one of these years (they said 8 weeks). I’ll point out that I haven’t put the caliper to the hole to test it for sure — I’m basing this on the spec sheet that came with the lathe.

The speed control apparently has a relay that controls the motor. This is probably done for safety reasons so that the lathe does not start up suddenly if the power is interrupted for some reason (a popped breaker, for example) and then restored.

It has been said that if you order SKU#39916 you will get the cam-lock version for $399 and that HF will not honor any sale prices that may be advertised for #33684. However, some owners who ordered SKU#33684 ended up getting SKU#39916 at the sale price. I exchanged email with Harbor Freight customer service about this. Here’s what they said:

Like the 9×20 and 8 1/2 x 18, the speed is adjusted by changing belts, so it lacks the convenience of the continuously variable speed control of the 7×10 and Grizzly 7×12. Also missing, is the quick change gear box for thread cutting that is found on the 9×20 lathes.

I don’t know much about this lathe, since I have not yet seen any reports from anyone who owns one, but there has been some discussion on the 7×10 group recently which will shed some light.

according to HF tech support, the same lathe platform as the HF 7″x10″ 33684. I called them today and asked that very question. I also asked if it had reverse. The tech said that it did. He also said that for the most part the accessories from the 7×10 fit the 8×12, although none are specifcally listed for the 8×12 on the HF website.

The local HF stores here do not stock the 8×12 so I can’t look at one myself to verify this information, but it seems that it is an upscaled 7×10. Hopefully the tech was not wrong.

If this is indeed an upscaled 7×10 then the 44859 may be a viable contender to the Grizzly or Micromark if or when it goes on sale. 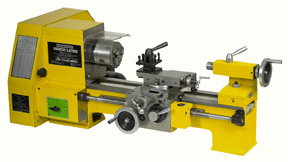 This is an altogether different beast from the 7×10. JW Early, a professional machinist who owns several lathes, including several 7x10s, a Grizzly 7×12 and a 9×19, has this to say about it:

Get the spec sheets on all the machines, compare features and equipment per dollar spent and then check what is available as add ons for them.

I think when you thoroughly check it all out you will see that the 7×12 and then the 9×20 are the value leaders in their size class. All the other machines in these sizes are either lacking in specification or overpriced or both.

Here are some additional comments by Jack Fusilier:

The 9×20 offers QC(quick change) gearshift and includes both steady rest and follower rests, as well as both 3 and 4 jaw chucks. Power is supplied by an ac capacitor motor and a conventional pulley and belt drive system for speed control. It is large enough for modification by add ons from larger lathes.

The only deficiency is the lack of a tumbler reverse gear for cutting left handed thread and powered cutting in the direction away from the headstock. This is a relatively minor problem, however, and installation of a tumbler reverse is a excellent easy and practically foolproof first project for a machining wannabee.