Harbor Freight, Grizzly, Enco and others sell variations of a 9×19 or 9×20 Chinese lathe. These lathes probably get more criticism than they deserve.  Like the 7x lathes, they have their shortcomings, but if the 7x lathes are too small for your needs, the 9x lathes might be a good choice for you.  Here are some comments from Steve Bedair, who owns both and knows what he’s talking about:

I have had the HF 9 x 20 for a while now and love it. The no leadscrew reverse is no biggie for me since I’ve never cut any lefthand threads.

I also like the fact there are no electronics to fry each time the chuck is stalled. Some complaints about the speeds being too fast but I have not noticed this. Seems to me a good range of useable speeds to me. One complaint would be the tool post clamp needs to be beefed up. This was the first mod I did. And yes it did take some adjusting but not as much as my 7x. I would have to give my 9x a thumbs up. Steve Bedair

While larger in capacity than the 7×10 or 7×12 and incuding change gear selection levers, they lack some desirable features including continuously variable speed and reversible leadscrew. JW Early bought one of these a few years back and has some reservations about it.  Here are some of his remarks:

The main problem with these machines is the lack of tumbler reverse. That is no ability to cut left hand threads. This can be fixed with a little work. Two on this list have successfully done this modification. The other problem is a very undersize lead screw and zinc cast nut on the cross slide and compound slide feed. This causes a very notchy and rough feel when using these slides.

At the present I am making new feed screws for my machine. Another problem is the clamp that holds the compound to the cross slide uses only two screws and is of very flimsy construction. I made a stronger unit about 10 years ago for mine that uses four screws and that has worked fine. The basic structure of the machine is good and if you want to put some time into improving it you will have a good if not great machine to work with.

Here are some photos JW Early provided showing the difference between the compound for the 9×20 and 7×10: 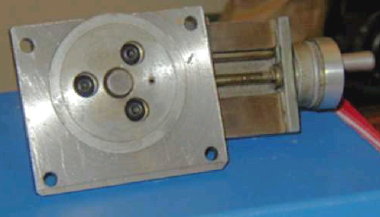 It is only half a quick change machine. You only get a choice of 8 pitches/speeds on the box. To change selections for the other 32 speeds you have to use change gears. Next it has no tumbler reverse on the leadscrew for left hand threads or cutting from the chuck out as you can do on the 7×10. Cross slide operation is even more awkward than the 7×10 and the mounting for the compound slide is not as sturdy although it is easier to change compound angles on.

It uses a 1 1/2-8 spindle thread so other chucks are easy to mount. It does not have a back gear low speed option for cutting coarse threads or cutting hard materials. The belt drive is on the end of the spindle instead of between the bearings, so when the bearings get hot after an hour or so of work the spindle tightens up and can fry the motor if you are not careful. I know I fried two motors on mine before I started limiting my running times.

Basically it is a large sized hobby lathe with all of the concept problems and designed in limitations hobby lathes have. The 7×10 is a miniature lathe designed with many features of full sized lathes. Just remember if you get one it can be made to work, I have several articles on fitting a tumbler reverse that I could pass along. I also have a drawing for an improved compound mounting/clamping bracket that I had to fit to mine before it could even be used.

The factory clamp is so weak that the cutting tools are forever grabbing and digging in, breaking the tool or the belt. The sturdier mount allows the machine to actually work. The compact series from Emco-Maier have all of these same basic design flaws as the 9×18/9×20 machines are a direct copy of them.

The spindle bore on the 9×20 class machine is exactly the same as the 7×10 and the South Bend and Logan 9″ lathes. Any machine that has a spindle taper of MT3 is going to have a spindle bore of just over 3/4″. This can be opened up with a reamer to about .810 to .815 without any problems. The 9×20 could be a good machine if the builders had been a little creative and not faithfully copied the Emco-Maier Compact 8 to such detail.

The major problems with these machines are no tumbler reverse for left hand threads and a totally inadequate mount for the compound slide. I was not able to use mine until I made a redesigned mount that uses 4 screws instead of 2 to clamp it down. These machines can be made to do good work, but they need a massive amount of detail improvement before you can do much of anything on them. Read the messages here and check out some of the 7×10 web sites and see the improvements many here have done.

The 9×20 machines need most if not all of these fixes to work and some more very involved work that is unique to them. I have had one for about 12 years now and rarely use it anymore as it is much easier to use the 7×10 for small parts and my South Bend if I need something bigger. As far as I have been able to see the only difference between those from different companies is the color of the paint and the label plate.

The Jet 9×20 is the same Taiwan 9×20 with a Jet white paint job for about $500 more than HF and Grizzly sell it for. I have had one of these from the original importer before the rest got into it. The machine has a good solid bed and is heavy. As far as productive work goes unless you need 8 more inches between centers the 7×10 can do more and better work easier than the 9×20 machines can. The 9×20 is a oversized hobby lathe like the EMCO Compact 8 that it was copied from.

It is missing many features that are standard features on the 7×10 such as: Reversible lead screw feed by tumbler lever Slow speed back gear system for threading and heavy turning Reversible variable speed motor The ability to pick it up and move it to where you want to work.

The 7×10 is a small sized real lathe like the Myford, South Bend and Logan lathes just more compact. The 9×20 is a large size hobby lathe like the Compact 8 and the larger Prazi with all of the same performance limitations of the type. But if do get a 9×20 do not get it from Jet or waste your money on the stand unless you are under 4′ tall and like to work sitting on the floor.

Here are some comments by Jack Fuselier, a gunsmith who owns a 9×20:

I considered the 8.5×18 vs the 9×20, and after looking over the manuals HF sent me, it was a no-brainer. The 9×20 has the quckchange gear box, not so the other. The 9×20 lathe is not just bigger, it also comes with both chucks, a faceplate and both steady rest and follower rest as well as tools. Backsplash and chip pan are included.. For a hundred bucks or so more, you get a full size bench lathe, capable of pretty large work.

I am an active professional gunsmith in east Texas, and in the three months I have had my 9×30 I no longer use my giant 1 1/2 ton Davis, and plan to sell it. For the few times I work a rifle barrel, I can use a friends Atlas. One drawback is the lack of a tumbler gear to reverse the leadscrew, but only the minilsaathe has that anyway, the 8.5×18 does not have it either. With suggestions from JWe and Tony Spezio, I installed a tumbler in my 9×20.

It was a relatively simple job, as gunsmithing goes. The other drawback is the weight, you will definitely going to need some kind of hoist or a couple of weight lifter buddies. OTOPH, perhaps the mionilathe is all you need. There is a big difference in an 80 pound machine and a 300 pound machine.

Comments from another owner (Ballendo):

I’ve used lots of lathes, from sherline, to leBlonde, and the 9×20 enco is just like all the rest. A tool. With good points, and bad points. (but mostly good. I’ve never understood the near universal dislike of this model) I suspect it may be for two reasons: First, it is a good price/size to encourage a first time user.

If they are inexperienced, and don’t understand that chinese tools are ‘kits’, then they will get a bad taste, and may carry that bad taste a long time… Second, it’s not a “big lathe”, and those who have spent their years along side a heavy duty cast iron monster will also be disappointed if they don’t see it for what it is; An import grade bench lathe. Mine works well for me.

And some comments from Mike Rowely:

I just picked up a copy of the Home Shop Machinist January 2000 issue. On page 53 there is an article on improving the Jet BD920 lathe, which is the same 9×20 sold by HF and Grizzly. The author mentions the same irritating design flaw that has been talked about in this group, the feed screw.

Anyway he describes how he added tumbler gears to give the lathe a LF N RF gear lever and also how he added a variable speed power feed. It’s a very interesting article and the photos are wonderful, but it lacks enough detail for me to be able to duplicate the authors work. He does mention a past article written by E.T. Feller that covered adding tumbler gears to the 9×20.

Samuel Machinery recently notified me of a new 10×27 lathe they are offering. If you would like to contact them, their phone number and email address is at the bottom of the spec sheet below.

I learned about this intriguing lathe from Doug Fortune. Doug bought his from Busy Bee and sent me a picture. It weighs 355 lbs and costs CAN$1200 (US$750).

According to Doug, the spindle has a 1″ through hole – nice feature! I don’t have much more info at this time, but will update this section as I receive more info. Thanks, Doug!

Net weight is catalogued as 467 pounds; gross is 534. However, this is for the lathe and a milling/drilling head, which is what the catalogue shows. However, today the BB salesman told me that they were going to market the lathe only.

The worktable feed can be controlled and tilted in the longitudinal and cross directions. I don’t know if this is standard with the lathe, or part of the mill/drill option. Feed can be controlled manually or automatically. There is an electrical reverse; no tumbler reverse. If memory serves, it comes with a 5″ 3 jaw chuck.