There has been a fair amount of dicussion on this model on the 7×10 group. It looks similar to the 7×10 and 7×12 but a few differences are evident:

Basically, the CH-350 is finished much better than the Chinese versions. It’s made in Taiwan. Even though it appears to have the same design, there are several differences.

Headstock has green grease in it. The headstock has paper shims between itself and the bed for precise alignment. The bed is two pieces, a cast iron base frame and an extruded aluminum bed ways, hard anodized.

The front of the bed, above the rack and under the saddle, has a rule scale for ballpark positioning of the saddle. The headstock, saddle and tailstock are secured to the bed with large aluminum T-nuts in the center channel.

The saddle “gib” adjustment is two capscrews on left & right sides, with an adjuster setscrew between each pair. It’s a cinch to adjust, and it stays in adjustment. The half nut engagement lever is on the right side, just like the other 7x’s, not like the photos we’ve seen.

The saddle is iron, but the cross slide and compound are aluminum, as are the gibs. Threading dial is a little better design, in the same type housing. Ball bearing mounts for the feed screws, including the tailstock. Tailstock has a graduated collar for precise feed.

Tailstock setover clamping is under the barrel and readily accessible, but has no fine adjusting screws. Tailstock takes standard length MT2 tooling, such as my Skoda Live Center. I do cut off the flat end of MT2 arbors to the same length as the Skoda.

Change gear end of lathe is the same, but more robust dimensions. Change gears are plastic. The spindle preload nut is a wide, roundish nut with four flats, and secured with a setscrew.

The motor is larger, same size as the Mini Mill, has a metal pulley and Gates belt. Has been very easy to realign, using the four mounting bolts through the frame.

The controller has about the same speed range as the HF units. No reverse switch. I easily added one. I haven’t tried to adjust the low speed down yet, since I have other lathe options here.

The underside of the saddle and tailstock are actually finish machined. The backside of the apron is open, same as HF and others. The half nuts are a simpler design, without gibs and travel adjusters. I don’t know yet if that will be an issue. Works fine for now.

The included 4-jaw chuck has three mounting holes, same as the 3-jaw. The chucks mount with bolts and washers. The spindle flange stands farther away from the headstock to allow room.

The cross slide and compound have gib locking screws. They would be an easy addition to the rest of the 7x’s. Also, the saddle can be locked by loosening one of the gib adjuster set screws. Kind of a cludge, but it works. While I’m at it…

There is a cute blue metal tool box, similar to what cheap socket sets come in, that has the extra jaws for the 3-jaw chuck, a “rolling” center, tailstock MT2 drill chuck (10mm or close to 3/8″), spanner wrench, hex key wrenches on a ring and a plastic oil bottle, with some light oil in it.

The operation and parts manual is clear and legible printed on slick stock, however, the english and grammar are clearly translated.

Basically the whole lathe is nicely finished, all mechanical movements were smooth out of the box. So far, there hasn’t been any sign of wear or damage from swarf on the anodized aluminum surfaces, including the contact between the saddle and the bed ways.

The saddle seems to push the swarf along, rather than suck it under. I do try to keep it reasonably clean, using a chip brush during use and a clean rag after the work is done. I use way oil on the sliding surfaces and white lithium grease on the feedscrew threads. I have noticed some flexing of the cross slide and compound, but that was parting off the flat tail of MT2 arbors.

I’m corresponding with Chris about getting the parts, adding to my MicroMark conversion leftovers, to build an iron cross slide and compound for heavier (abusive) work. Whether or not it’s worth double the price? That’s going to be subjective. It does seem to fall correctly, both in quality and price, between the Chinese offerings and the European offerings.

I haven’t noticed any tendency for steel swarf making any marks. The hard anodizing seems to be doing it’s job so far. And again, the fit of the saddle to the bed seems to be tight enough to act as a wiper while the saddle traverses. It even wipes dust that’s landed on the oil.

When I move the saddle back in the other direction, the ways are clean with no trace of debris coming from underneath. I did drop a wrench on the forward edge of the bed one time.

It left a small, smooth dent about 1/8″ wide. It’s on the outer edge where the rule is above the rack and has no effect on lathe use. I’m not sure, but a 17mm wrench might cause a dent in the cast iron beds as well. [It will, trust me 😉 FH]

One other feature I forgot… There’s a clear plastic retractable chuck shield, much like the one on the Mini Mill except it has a full length slot. I see that the lathe in your picture from the Cabin Fever Show has the half nut lever on the right, handwheel on the left. So, it seems that the machines Samuel Machinery imports are different than domestic and european export models.

Samuel Machinery Co. had this model on display at Cabin Fever 2001. I did get a look at it and it appeared to have better fit and finish than the HF 7×10 and even a little better than the Grizzly 7×12. Unfortunately, this is the only photo I got of it: 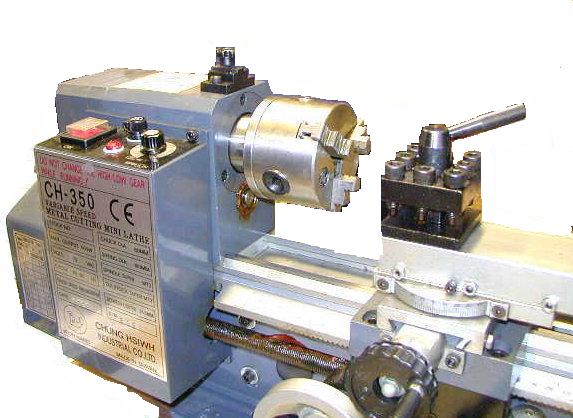 Charles (Ecosense) posted a notice on the Egroups list about a 7×12 version with an aluminum bed and compound. Here’s his comments and picture:

A 7×12 version which haven’t been posted yet is on the market in The Netherlands.

At first glance it is similar to all others, the finish of the bed and compound seems impecable, which some how attracts attention. A second look learns that the compound is made out of aluminium, and that on top of the cast iron bed there is an extruded aluminium profile which forms the ways. The profile is the same as known of the other versions, flat with a raised up side down V. The reason is clear, this saves a lot of machining, and better profit margins, The retail price of more than $ 900,- is already high, but sales argument is, that a steel bed cost a lot more.

It could be a way to upgrade rejected castings, but a rationalised production is more realistic. For turning wood, brass and aluminium not much of a problem I suppose, but steel chips could scrach the bed.

On the other hand, to say something positive, it really looks good, and, as long as you clear it from chips, you don’t have to worry about a rust on the bed, recently a big issue for some of us.